The Seastar – an Airplane You Can T(h)rust

The Seastar was designed with a specific objective: amphibious operations capability including regular landing on runways but also landing on water surfaces.

The massive experience gained with one of the most successful seaplanes from Dornier, the Dornier Wal which flew postal services in the 1920’s and 30’s around the world, was directly converted into the Seastar design. From the early days it merged all the experience gained to fulfill this objective with outstanding operational capabilities.

One of the special design features is the tandem in line and center thrust propulsion system configuration. This symmetric multi-engine installation ensures symmetric thrust with both engines running, but also in the event of one engine failure.

With other multi engine configurations you face the issue that in the event of an engine failure, the remaining engine provides asymmetric thrust, which unbalances the plane in its vertical axis and have to be countered through large rudder inputs.

This may significantly increase the pilot’s workload and make it relatively unsafe to operate compared to the Seastar center-line thrust design. Pilots can fly the aircraft with less training and the operational feeling and awareness is similar to a single engine plane, but featuring multi engine reliability and power. 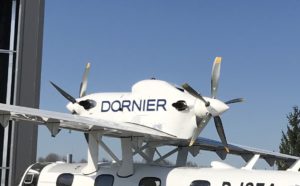 Additionally the symmetric thrust installation has another advantage. To ensure maximum safety and engines lifetime, both are installed on top of the wing and centered above the fuselage where they are protected from water spray during water operation, especially during take-off phase when water spray could go into the engine inlet.

The asymmetric alternative is an installation on the upper side of the wings, where 2/3 of the lift ratio are disturbed on both half wings, while with the Seastar configuration just one, affecting only the central part of the wing.

Easy accessibility of the engine compartment for maintenance purposes is another big advantage. The fuselage and wing can be used as maintenance stair and station, without the use of less safe stairs and ladders especially during maintenance on the water. The access to both engines is provided from the same location. The Seastar engine installation is very advanced and well developed, and tested by its predecessor the Dornier Wal. You can trust the Seastar to meet and perform its missions.

The Dornier Seastar. A Star is Born.